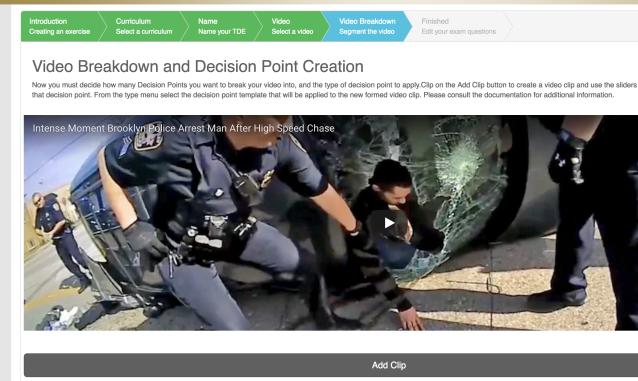 The Polis Solutions team is excited to announce the national release of the Polis Patrol Expert™web-based scenario training system at IACP in Orlando this week. Polis Patrol Expert (PPE) is a web-based digital training system that gives law enforcement agencies of any size a simple, affordable way to create, deliver, and evaluate training scenarios using video footage from body-worn cameras or any other source. PPE software lets law enforcement agencies upload video files to our secure site, and then use simple editing tools to quickly turn the videos into web-based training scenarios. The system also contains a library of existing scenarios. Once your training is built, your agency’s personnel can access it anytime, anywhere, and you can track and measure their performance. Come see us at IACP Booth 683.

Police jobs are still good public sectors jobs, even in the face of the recession, pension reforms, and often weaker unions. Nonetheless, a strong economy and a critical politics surrounding policing, has made it increasingly difficult for law enforcement agencies to fill their ranks, according to The Crime Report.  There is the potential for the inability to hire desirable candidates for police positions could exacerbate the problems perceived by the public with policing, for example more diversified departments. Law enforcement agencies are often rightly criticized for not having departments that recruit from their own communities, at the same time, the optics of policing have made it so that many in the community don’t want to be law enforcement officers, making it hard for departments to be responsive to the community. Some departments are pushing strong marketing campaigns to try and increase recruitment, but I suspect making policing desirable to those most desired by LEA’s will be an uphill battle.

Policy vs Punishment: What is the best way to reduce Officer Involved Shootings

The Crime Report recently reviewed research by criminologist Lawrence Sherman on the best approaches to reduce Officer Involved Shootings (OIS). Conventional approaches, and those most often favored by journalist and activist, essentially applies the crime and punishment model of accountability that is already the dominant model in the criminal justice system. Sherman argues this is not effective,

“there is far greater evidence that fatal police shootings can be reduced by re-engineering policy systems than by trying (with little chance of success) to change the legal immunity of police officers or the behavior of juries.”

Sherman is not alone in this assessment. Another leader in criminology, Franklin Zimring in “When Police Kill” has made a similar argument based on a comprehensive empirical assessment of police shootings and departmental policies, arguing that changes to administrative rules are the single most important factor in reducing OISs.

Sherman argues that the focus on assigning individual blame ignores system level problems, what he calls “system crashes,” that account for improprieties are allowed to persist. Sherman advocates that law enforcement organizations adopt “learning cultures,” similar to those found in medicine or aviation, where agencies engage in rigorous organizational postmortems to identify and correct dysfunctional processes and procedures.

Sherman is not arguing punishment must go away, only that the emphasis should be placed on the strategy that will maximize the likelihood of the kinds of outcomes desired by society.

I don’t know why, but the daily German news paper, Frankfurter Allgemeine Zeitung, wrote an article about a research article written by Laura Mangels and myself. The article was published earlier this year in the European Journal of Sociology.  I don’t read German so I have no idea what the article says. But hey, neat! 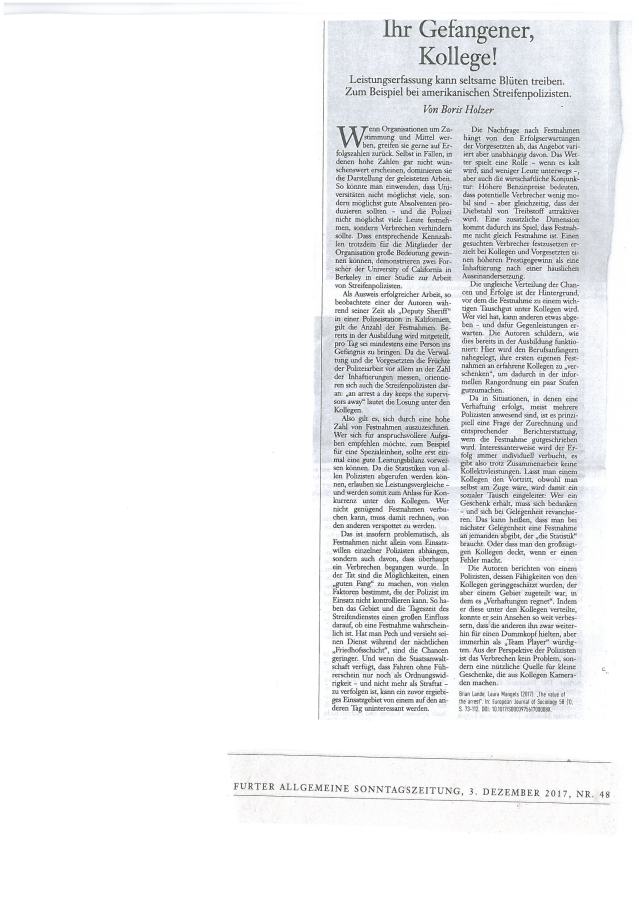 The Fraternal Order of Police wrote a letter to the GOP to warn that the elimination of the State and Local Tax deduction, SALT, will negatively impact police services. Police services are funded through local taxes. Elimination of SALT will make paying local taxes harder on citizens because they can no longer deduct the cost of those taxes from Federal taxes. Cities and counties, which rely on tax revenue to pay for police services will have constituents less able to tolerate any local tax increase and who are increasingly burdened by existing local taxes. Elimination of SALT is meant to offset the cost of decreasing corporate taxes. The hidden cost will likely be a more fragile and poorly funded police service, making public safety a causality of the proposed tax plan. 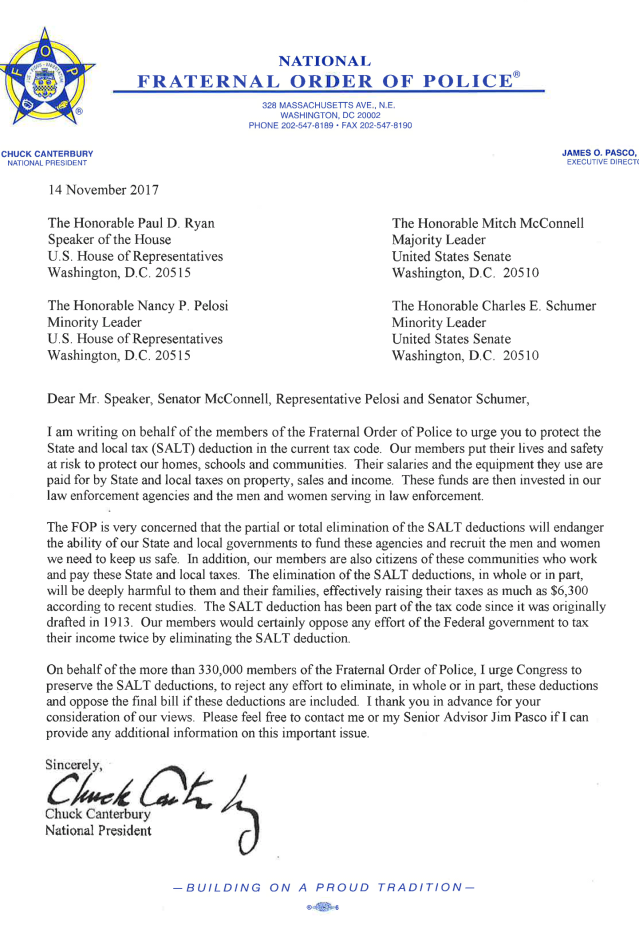 Gangs, such as MS13, have received a lot of political attention from Republicans this election cycle. During the campaign many claims about gangs, immigration, and crime where made. The problem is, our quantitative understanding of gangs, their prevalence and relationship to crime or immigrants is limited because we don’t have a great way to count how many gang members there are. There is no gang census, after all. Read more at FiveThirtyEight!

There has been mixed evidence about the effects of diversity in police departments. Counter intuitively, studies have shown diversity can increase police use of force. But a new study from the University of Central Florida shows diversity may help police departments in one key way, by making officers more likely to be friendly. Read a summary of the findings here.

NPR reports on Polis’s Use of Force Taining for CPD

Polis Solutions’s training for CPD has been featured in a radio piece on NPR by Cheryl Corley, “New Use-of-Force Guidelines For Chicago Police”.

“Chicago patrol officers and detectives, both in and out of uniform, showed up recently for one of the last training sessions for the department’s new use-of-force policy. On the tables are blue worksheets for officers to note how the policy relates to different scenarios while watching videos of real police encounters.”

“I’ve been a Chicago police officer for a long time, and I can tell you this is monumental. This is going to give the training to the officers and will give them the confidence to go on the street to react and act in the proper way.”

Interview with Ellis Amdur part 2 – The de-escalation of violence and the relevance of Budo | Interviews | Aikido | GuillaumeErard.com – Budo & Life in Japan

Ellis has a practical mastery of de-escalation as well as theoretical understanding informed not only by psychology but his mastery of martial arts. Read this interesting interview with Ellis Amdur, bellow:

I earned my Ph.D. from the Department of Sociology at the University of California—Berkeley in 2010. I am also a police officer in an an East Bay Police Department.  From 2010 till 2012 I was a program manager at the Defense Advanced Research Projects Agency (DARPA). At DARPA I managed the intersection between Defense and Social Science and managed the Strategic Social Interactions Module (SSIM). The SSIM program was geared toward training development on tact and tactics for service members. I also co-founder of Polis Solutions, a consulting firm specializing in the social factors of human, organizational, and design performance.