The NRA’s Wayne LePierrer made numerous empirically questionable statements. One of them is that media (television, music, film, and video game) violence is in part to blame for mass shootings.

Interacting factors such as exposure to family violence, street violence, and violence in schools (i.e. living in a world of danger and everyday violence) on the one hand and dispositional factors such as being male, genetic predisposition, less lead in the water (Nevin 2000), and even diet (e.g. Sanchez-Jankowski 1991) better predicts and explains violence than media (Paulle 2005; Ferguson 2007; Ferguson et al 2009; Pinker 2002).

There may be a role for media effects in how those that are likely to engage in violent behavior “stylize” their violence. For example, in gang violence, media may not cause gun violence but it may be relevant to the peculiar fascination that some gang members have had with shooting their guns sideways (not only a stylistic effect but one that greatly decreases their accuracy).

The other significant problem is that youth violence has declined steadily (van Dijk, van Kersteren, and Smith 2007) even as there has been a proliferation of violent media.

← What Money Can’t Buy & The Case of Therapy
Paul Bloom: The Case Against Empathy : The New Yorker →

I earned my Ph.D. from the Department of Sociology at the University of California—Berkeley in 2010. I am also a police officer in an an East Bay Police Department.  From 2010 till 2012 I was a program manager at the Defense Advanced Research Projects Agency (DARPA). At DARPA I managed the intersection between Defense and Social Science and managed the Strategic Social Interactions Module (SSIM). The SSIM program was geared toward training development on tact and tactics for service members. I also co-founder of Polis Solutions, a consulting firm specializing in the social factors of human, organizational, and design performance. 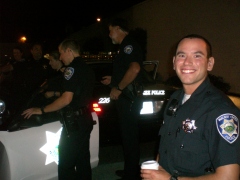